[Back to the Main Page!] 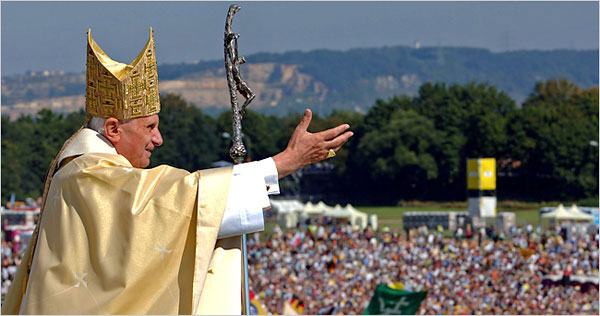 The Catholic Church wants Sunday observance enshrined in EU law. The European Parliament has debated changes to its Working Time Directive. Some Parliament tabled an amendment saying that the minimum rest period “shall in principle include Sunday.” The Brussels-based Commission of Bishops’ Conferences of the European Community (COMECE) agreed, recommending the directive should say “the minimal weekly rest must include Sunday.” But the proposal texts were not good enough. Now five Parliament members have put forward a new declaration. Accordingly this declaration now introduced into parliament calls on the Member States and on the EU institutions to “protect Sunday, as a weekly rest day, in forthcoming national and EU working-time legislation in order to enhance the protection of workers' health and the reconciliation of work and family life”.

In order to be adopted, it is now necessary for the Written Declaration to be signed by a majority (394) of MEPs before 7 May 2009.

Here you have the exact text:

WRITTEN DECLARATION
pursuant to Rule 116 of the Rules of Procedure by Anna Záborská, Martin Kastler, Jean Louis Cottigny, Patrizia Toia and Konrad Szymański on the protection of a work-free Sunday as an essential pillar of the European Social Model and a part of the European cultural heritage
Lapse date: 7.5.2009

If EU will make a specific day, Sunday as a day of rest, then they will enforce a lifestyle change on its subjects. Then the people in alle the member states will be forced to follow a state religion – Catholicism. The enforcement of Sunday worship will be the mark of a powerful Vatican-allied European superpower.

In our magazines like THE ELITE TIGHTENS THE GRIP we have for many years ago warned about this developement, like this: ”It appears as a master plan that the religious dimension, as a gathering point, should come last. In this way it appears to be a point of less wait or importance. This is a clever strategy, since once they have acquired unity in the economical, political and military dimensions, unity in the area of religion naturally follows.”…” As we have read in Revelation 17: 14 it says that it is these world powers which war against the Lamb, Christ, and all that stand on His side. This is the final war in a nutshell. All of the world's destroying powers will come together - for what? What is it we are waiting for? Yes, just as they have implemented common standardized regulations in the political arena, they will also implement religious regulations. They will implement the beast's mark.”

The Catholic Church itself claims to have a mark. They claim Sunday as the mark of their authority, and that others acknowledge the church's authority by Sunday observance (From Thomas, Chancellor of Cardinal Gibbons and the Douay Catechism, p. 59). The church therefore says plainly that their mark of authority is their implementation of Sunday, the Biblical first day of the week, as the day of rest, in place of the Sabbath, which is kept from sunset on Friday until sunset on Saturday (Mark 15:42-47, 16:1-6l; Leviticus 23:32; Nehemiah 13:15-21). The Bible speaks of only one day of rest in the week, which is the Sabbath. This is the only day of rest, which God has hallowed and blessed, from creation onward. In the Ten Commandments we are instructed to keep the seventh day, the Sabbath, as the day of rest (Gen. 2:1-3, Ex. 20:8-11, Acts 18:4).

”Sunday is a Catholic institution, and its claims to observance can be defended only on Catholic principles…From beginning to end of Scripture there is not a single passage that warrants the transfer of weekly public worship from the last day of the week to the first.” - The Catholic Press, Sydney, Australia, August 1900

”It is well to remind the Presbyterians, Baptists, Methodists and all other Christians, that the Bible does not support them anywhere in their observance of Sunday. Sunday is an institution of the Roman Catholic Church, and those who observe the day observe a commandment of the Catholic Church.” - Priest Braby, in an address, reported in the Elizabeth, N.J. ”News”, March 18, 1903

”Question: Have you any other way of proving that the (Catholic) Church has power to institute festivals of precept (to command holy days)?
Answer: Had she not such power, she could not have done that in which all modern religionists agree with her: she could not have substituted the observance of Sunday, the first day of the week, for the observance of Saturday, the seventh day, a change for which there is no Scriptural authority.” - Stephan Keenan, A Doctrinal Cathecism, page 176

Conclusion: The Catholic Church openly admit that it is they that by law has changed the day of worship from Sabbath to Sunday in 336 BC. They also admit that if we shall follow the Bible, we have to keep the Sabbath holy, not Sunday.

Methodist:
”It is true that there is no positive command for infant baptism. Nor is there any for keeping holy the first day of the week. Many believe that Christ changed the Sabbath. But, from His own words, we see that He came for no such purpose. Those who believe that Jesus changed the Sabbath base it only on a supposition.” - Amos Binney, Theological Compendium, page 180-181

American Congregationalist:
”The current notion that Christ and His apostles authotitatively substituted the first day for the seventh, is absolutely without any authority in the New Testament.” - Dr. Layman Abbot, in the Christian Union, June 26, 1890

When we are talking about what is happening about this subject in the very near future:
”Fearful is the issue to which the world is to be brought. The powers of earth, uniting to war against the commandments of God, will decree that "all, both small and great, rich and poor, free and bond" (Revelation 13:16), shall conform to the customs of the church by the observance of the false sabbath. All who refuse compliance will be visited with civil penalties, and it will finally be declared that they are deserving of death. On the other hand, the law of God enjoining the Creator's rest day demands obedience and threatens wrath against all who transgress its precepts.
With the issue thus clearly brought before him, whoever shall trample upon God's law to obey a human enactment receives the mark of the beast; he accepts the sign of allegiance to the power which he chooses to obey instead of God. The warning from heaven is: "If any man worship the beast and his image, and receive his mark in his forehead, or in his hand, the same shall drink of the wine of the wrath of God, which is poured out without mixture into the cup of His indignation." Revelation 14:9, 10.
But not one is made to suffer the wrath of God until the truth has been brought home to his mind and conscience, and has been rejected. There are many who have never had an opportunity to hear the special truths for this time. The obligation of the fourth commandment has never been set before them in its true light. He who reads every heart and tries every motive will leave none who desire a knowledge of the truth, to be deceived as to the issues of the controversy. The decree is not to be urged upon the people blindly. Everyone is to have sufficient light to make his decision intelligently.
The Sabbath will be the great test of loyalty, for it is the point of truth especially controverted. When the final test shall be brought to bear upon men, then the line of distinction will be drawn between those who serve God and those who serve Him not. While the observance of the false sabbath in compliance with the law of the state, contrary to the fourth commandment, will be an avowal of allegiance to a power that is in opposition to God, the keeping of the true Sabbath, in obedience to God's law, is an evidence of loyalty to the Creator. While one class, by accepting the sign of submission to earthly powers, receive the mark of the beast, the other choosing the token of allegiance to divine authority, receive the seal of God.
-Ellen G. White: In the book The Great Controversy, page 605

[Back to the Main Page!]